Are You Genetically Closer to Your Parents or Siblings? 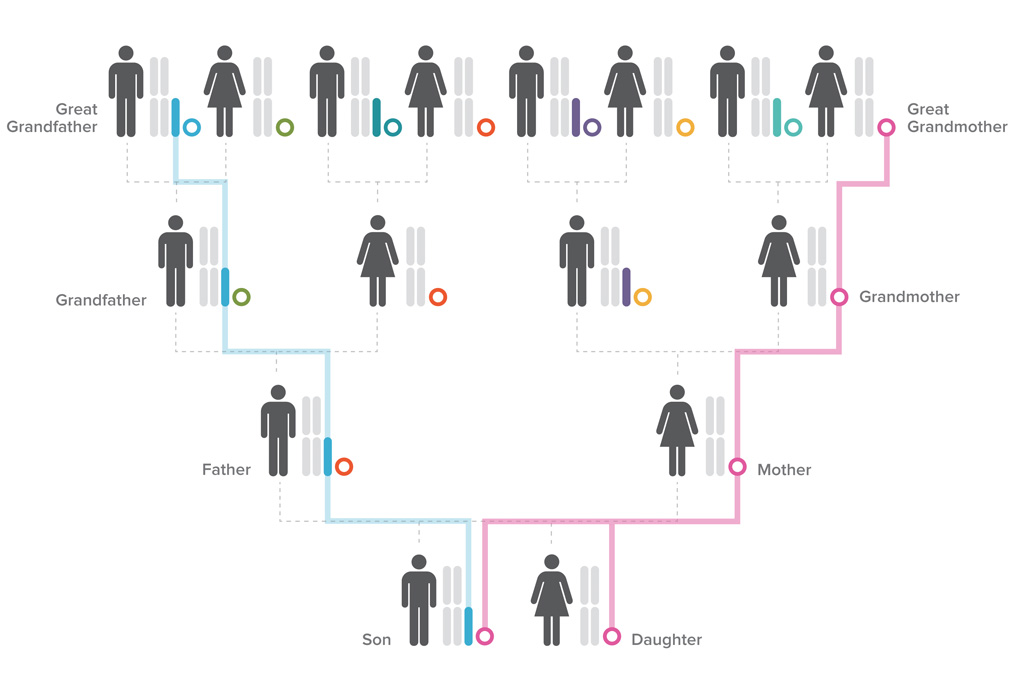 Did you already have your answer in mind after reading the title? I know I did; I immediately thought “siblings, right?” Long story short, yes, you can be genetically closer to your siblings than your parents, but you’re considered to be about equally related to both your parents and siblings. To understand why, I looked for the science behind this question.

First, let’s review some genetics. Each person has 23 pairs of chromosomes, 46 in total, receiving one set of 23 chromosomes from each parent. For simplicity, we will exclude the sex chromosomes (X and Y) for now. (More on those at the end!) Each chromosome is broken up into small segments, called genes, that are commonly called the “functional unit of heredity” because they contribute to your unique traits. Because you have two of each chromosome, you can have two slightly different versions of each gene, called alleles.

At first thought, the math may seem easy: you and your siblings have the same 50/50 chance of inheriting one allele or the other from each parent. Therefore, wouldn’t you be equally half-related to each one of your parents and siblings?

However, there is one more component to consider: you are almost exactly half-related to each parent because half of your DNA comes from each of them. On the other hand, you are only half-related to your siblings on average, meaning you could share more or less DNA with your siblings. Statistically, siblings could theoretically be anywhere from 0 to 100% related if they got none or all of the same alleles. Consider the following possible heredity situations, which look at 2 pairs of chromosomes, for simplicity:

The percentages underneath each sibling represent how genetically similar (related) they are, compared to Sibling 9. Each chromosome is represented as an “X”. Different alleles are represented as different colors.

Opposite ends of the spectrum

The only example of siblings that share 100% of their DNA are identical twins. This type of twins is also called monozygotic because they originate from one zygote, or fertilized egg, that split in two. Because they came from the same exact sperm and egg combination, they share the exact same DNA.

The odds of siblings being “0%” related is extremely slim, estimated to be about one in ten million if you just consider the 23 chromosomes as is! However, considering other genetic factors, like mitochondrial DNA, the Y chromosome, and genetic recombination, siblings actually cannot be “0%” related.

The simple examples so far have excluded more complex genetic factors, such as the sex chromosomes, mitochondrial DNA, genetic recombination, and new mutations.

Only the father can pass along his Y chromosome, as the mother only has two X chromosomes. Therefore, brothers and their father share their entire Y chromosome. Although random mutations may happen throughout generations, the Y chromosome remains largely unchanged. In fact, two men separated by 13 generations only had four mutations, which is remarkably low!

Similarly, siblings share their mitochondrial DNA with each other and their mother because their mitochondria only come from the mother’s egg. The mitochondrion, colloquially called the “powerhouse of the cell,” is an organelle found in most human cells that provides energy to the cells. It’s unique in that it has its own DNA – albeit a tiny amount, only coding for 37 genes – which provides evidence that the mitochondrion may have originally been a bacterium that was engulfed by a cell. This resulted in a beneficial relationship for both and stuck around throughout evolution, turning what once may have been a bacterium into what is now an essential part of most eukaryotic cells.

Genetic recombination shuffles alleles between chromosome pairs in a parent’s cells as the pairs get split up into sex cells through a process called meiosis. This creates sex cells with different combinations of alleles in each parent, which can be uniquely combined to create each child.

Despite being a unique combination of your parent’s genes and new mutations, you are, on average, equally genetically close to both your parents and siblings.