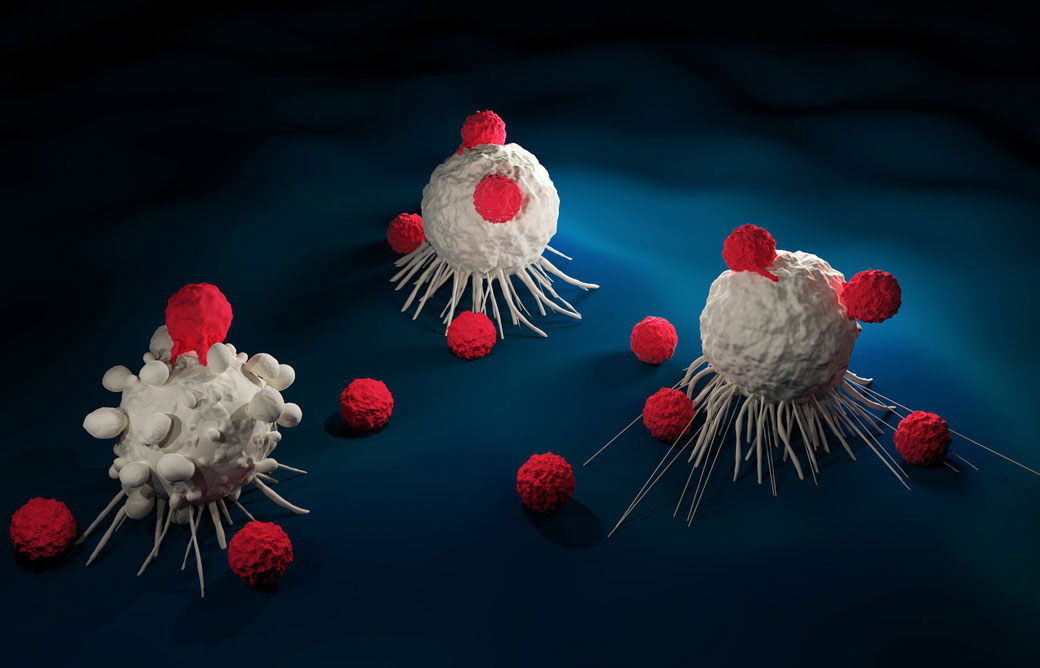 The body’s own immune system has an important role in battling cancer, and it is no surprise that scientists are exploiting that feature to fight tumor cells. This specialized type of oncology is called cancer immunotherapy (or sometimes immuno-oncology) and it is revolutionizing the way cancers are treated. In fact, it is considered so important that James P. Allison and Tasuku Honjo were awarded the Nobel Prize for Physiology or Medicine for the discovery in 2018.

Cancer immunotherapy encompasses a range of therapies that involve redirecting the immune system to fight cancer. This type of treatment is made possible by the fact that cancer cells often possess proteins on their surface that the cells of the immune system can recognize and bind, often initiating the destruction of that cell.

One of the newest and most exciting that has taken off recently is called CAR-T (chimeric antigen receptor T cell) therapy. CAR-T therapy involves collecting the patients’ own immune cells (specifically T cells) and reprogramming them to attack the cancer. In the lab, scientists can engineer the cells to recognize a new antigen (a protein found on the surface of the cells that T cells can bind to) that is specific to the cancer cells. This means that when the T cells are re-introduced to the body, the T cells recognize the cancer cells a threat, and initiate a response to kill them.

CAR-T therapy has so far been mostly used to treat B cell malignancies (blood cancers), but the FDA recently approved the therapy for multiple myeloma (a bone marrow cancer) where other treatments have failed.

Where has CAR-T been successful? 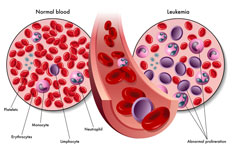 In 2017, a CAR-T therapy was FDA approved to treat acute lymphoblastic leukemia that has not responded to prior treatment, or has returned following treatment. This therapy is commercially known as Kymriah and was the first gene therapy approved in the United States – a testament to the revolution that cancer immunotherapy sparked. Yescarta, which is another CAR-T therapy for relapsed or refractory large B-cell lymphoma was approved. As of December 2019, these therapies remain the only ones that are approved, but more will likely come in the future, as there are over 500 therapies currently in clinical trials.

What does the future hold?

An important step forward will be making CAR-T treatment quicker and more accessible. The current available therapies involve what is called “autologous” therapy; the patient’s own immune cells are adapted to fight the cancer. The next generation (or an alternative route) of CAR-T therapy will involve “allogenic” therapy, where universal CAR-T cells are used, making the therapy more off-the-shelf. This is done by taking cells from a healthy donor, editing them, and creating hundreds of batches of cells for therapy. In fact, some of these universal therapies are already in clinical trials. This advance would make the therapy quicker, and more consistent. However, it does require some additional editing of the cells to prevent to prevent the immune system from rejecting the donor cells.

There are even products in the pipeline that could make these therapies applicable to solid tumors. Although some research and trials have had disappointing results. There is also the possibility of doing local injections, for example, intracranially to maximize the potency of the therapy.

CAR-T therapy has been so promising that there is the potential for it to be adapted to new diseases. Clinical trials are ongoing for CAR-T treatment of HIV, and preclinical data is promising for treatment of hepatitis B. It has also been proposed that CAR-T therapy could be beneficial in fighting autoimmune diseases such as colitis. 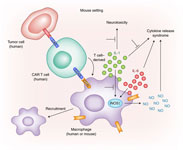 As with any novel and advanced therapy, there are hurdles to effective treatment. One of the major considerations is patient safety. With immunotherapies such as CAR-T, there is always a risk of adverse immune response from the body, such as cytokine release syndrome.  (sometimes called “cytokine storm” when at its most severe) occurs when the cells of the immune system rapidly release a massive amount of cytokines into the blood, causing an inflammatory response that can be life threatening. Sadly, this has been fatal in some patients undergoing CAR-T therapy. As the field moves forward, more is done to optimize CAR-T and to mitigate the safety risks.

There have also been cases of resistance to CAR-T therapy in multiple myeloma, usually occurring when the protein the CAR-T cells are targeting on the tumor surface is lost. Another alternative mechanism of resistance is when the transplanted cells fail to grow and divide enough to conquer the circulating cancer cells, a problem that could be overcome using universal CAR-T.

Despite the obstacles, the “CAR-T boom” is very real. This kind of therapy has huge potential to help patients, especially when other treatments have failed. However, it remains to be seen whether this therapy will truly be accessible, the current cost of CAR-T therapy in the United States is $373,000, and can take many months, during which time disease progression is a huge problem. Hopefully, with more clinical research, CAR-T therapy will become more widespread, and available to anyone who can benefit from its life-saving potential.

(9) The Nobel Prize in Physiology or Medicine 2018 – NobelPrize.org