Epigenetics: A Beginner's Guide to How It Works [+ Examples] 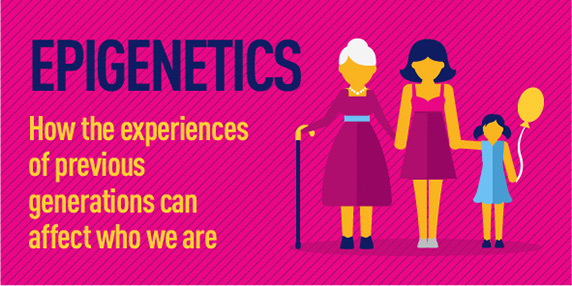 Understanding what causes diseases is not just crucial to creating treatments. It is also essential in the prevention of illness. While the focus has been on nature versus nature for many years, recent advances show that the solution may not always be so black and white.

Every cell in the body has a nucleus that contains 23 pairs of chromosomes. Each chromosome contains tightly packed DNA. The combinations of the varying lengths of DNA are what make up the genes. These genes are hereditary. They are used to instruct the synthesis of proteins that make up new cells in your body.

For the entire DNA to fit each chromosome in the nucleus, they tightly coil around histones. A histone and the DNA form chromatin. The Chromatins can be opened to allow the reading of genes.

In essence, the environment can affect which genes are active, and which remain dormant. The environmental aspect can have an impact on diseases such as cancer development and other disease risks. There is a lot of research going on to identify biomarkers related to various conditions. The study has already shown a lot of promise.

How Does It Work?

Epigenetics is quickly growing with the understanding that lifestyle and the environment can have a significant influence on gene expression. These changes will reveal themselves in various stages throughout the life of a person and later generations.

The biomarkers used in epigenetics are thought to be stable, dynamic, and modifiable by lifestyle and the environment. It is becoming apparent that epigenetics works inside the womb and outside the womb. Studies also show the epigenetic changes are reversible.

Numerous examples show that lifestyle choices and the environment can play a role in determining the health of an individual. The surroundings are suspected to be the most influential on epigenetic tags and susceptibility to disease.

Pollution is a significant focus of this research as scientists find that air pollution alters the methyl tags in DNA. Air contamination has links to an increased risk of neurodegenerative disease. The studies have also found that B vitamins might protect humans from the harmful effect of air pollution. Studies show that vitamin B can fight the detrimental effects of particular matter on the body.

Food has also been thought to have links to epigenetic change. Researchers found that those who consume a diet rich in fats, adequate proteins, and low carbohydrates experienced a surge in an epigenetic agent produced by the body.

Thus, the field of nutriepigenetics has generated a lot of interest in recent years. Scientists have found that the diet can modify epigenetic tags. There is a lot of research going on to determine how food and epigenetics work together to affect health.

In the end, the aim is to guide humans towards an optimal food regimen that could optimize their health. However, this will only be made possible with ongoing research into how various foods, the environment, and epigenetics work together to affect health. There is a lot of promise that the food you consume could protect against cancer. To do this, the compounds in food adjust methyl marks on the oncogenes or activate tumor suppressor genes.

One of the best examples of epigenetics is the agouti mouse. Cases of transgenerational epigenetic inheritance in endogenous genes instead of imprinted genes are rare. However, the agouti viable yellow (Avy) is a great example.

The Avy locus is a retrotransposon gene, placed in the upstream of the agouti gene. Although Avy is unique to mice, the element is present in thousands of copies. In ordinary cases, the Avy components are shut off. However, the agouti mouse, they are activated. It leads to a clear coat and pronounced obesity.

It occurs despite the mice being monozygotic, which means they have the exact DNA at birth. The number of agouti and non-agouti mice born is easy to deal with by altering the mother’s diet during pregnancy. If the mother feeds on a diet rich in folic acid nutrition, more brown mice will be born. The concept further illustrates that diet can affect epigenetics. It is something that normal genes cannot explain.

An example of how the environment can affect epigenetics is the Dutch Famine of 1944-1945. Studies show that children who were born during this period have an increased rate of coronary heart disease and obesity. The illnesses occurred because mothers had exposure to famine conditions during pregnancy. Those who never experienced famine faired quite well.

Another example is male fertility. About 50% of male infertility is unexplainable by modern science. Allegations had it that sperm was only used to deliver sperm. Thus, all men needed to do was show up. However, epigenetics is revealing that abnormal methylation of specific imprint genes of sperm highly correlates to fertility in males. Various studies are investigating how aberrant methylation at these loci affects fertility. In essence, the research is focusing on poor embryogenesis after conception.

The reprogramming makes it possible for the cells of a fetus to begin from scratch and build their epigenetic variations. However, scientists believe that some of the epigenetic change can avoid the process. They will thus make it into the next generation. If definitively proven, it means the environment and the kind of food one eats could affect the child. It has already been proven in animals but not people.

There is no doubt that it occurs in plants and fungi. There is also evidence of it happening in invertebrates. A good example is a toadflax. The common toadflax and the peloric toadflax are identical in every way. However, there are two variants of the same plant with the difference being only in one gene. However, the DNA code is still the same. The change is epigenetic.

Another example is wild radish. When caterpillars attack these plants, they turn bitter and grow spines. These traits are passed on to the offspring of the plants struck previously, even when there are no caterpillars in the area.

In mammals, there is proof that feeding vinclozolin to rats will affect the offspring. Vinclozolin is a fungicide often used in grape plants. When fed to pregnant rats, it causes permanent changes to the progenies. As adults, they will have low sperm count and be at risk of diseases such as kidney disease and prostate disease.

In humans, there is no direct evidence that epigenetic inheritance occurs. However, it is worth noting that humans have long lifespans, which make it hard to track changes. Besides that, they have high genetic diversity. There are also ethical considerations about the amount of manipulation that can take place.