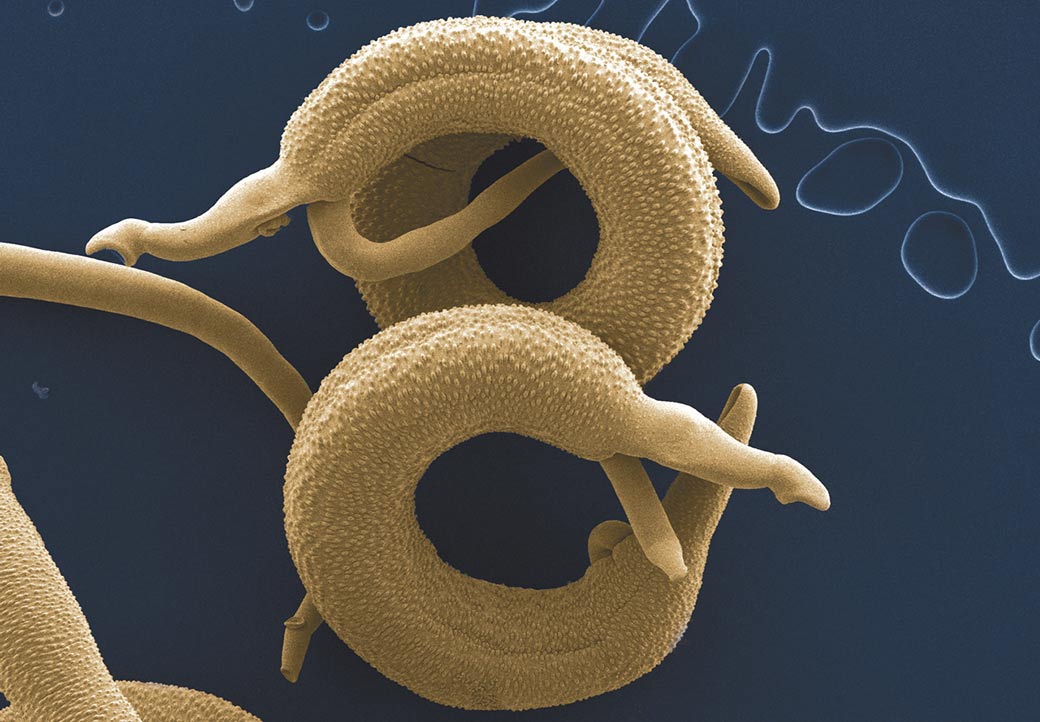 When it comes to infectious disease, few evoke revulsion like parasites and particularly parasitic worms known as “helminths.”

We’ve all winced after reading about the life cycle of the American hookworm, or Necator americanus. In their infective stage, their larvae, which lurk in soil or feces, can penetrate human skin and ride the blood stream to the heart and lungs, where it invades the pulmonary alveoli. From there, the larvae ascend the bronchial tube to the pharynx and are swallowed. Upon reaching the large intestine, they mature into adults and begin feed on our blood and lay eggs, which ride our feces back into the environment to renew the cycle.

While among the less virulent helminths, serious hookworm infections can result in anemia, which can retard growth and mental development in children.

Given such a gruesome life cycle, it’s hard to imagine why anyone would be willing to swallow N. americanus eggs in the name of science. Yet that’s exactly what doctors and medical researchers are asking clinical test subjects to do in New Zealand.

On July 20, the Malaghan Institute of Medical Research announced it had begun recruiting 15 healthy people between the ages of 15 and 65 to volunteer for a clinical trial designed to explore the therapeutic potential of human hookworms to treat diseases, including coeliac, asthma, allergy, MS and inflammatory bowel disease.[1]

The trial marks a significant advance in research because it is among the first to recruit healthy human volunteers for what scientists call “challenge studies.” Challenge studies, in which researchers intentionally infect healthy volunteers to develop vaccines and other therapies, are used to develop a baseline control for future trials.

Up until now, helminth therapy research has been limited to animals, or humans already suffering chronic autoimmune disease (AID). Data from those studies have convinced many scientists that the alarming increase in AID in the United States, the United Kingdom and Europe is linked not just to changes in our diet, overuse of antibiotics and lack of exercise, but to the near eradication of helminth infections.

This has raised concerns that as income and public health improve across parts of Latin America, Africa and Asia, aggressive deworming programs could make their residents more vulnerable to inflammatory and metabolic conditions now plaguing the west. [2]

Parasites, which can range from protozoa to fungi, bacteria and insects, have been coevolving with humans since the dawn of man. Their purpose in life is not to cause disease or death, but to reproduce. Highly virulent parasites that quickly kill a high percentage of their definitive hosts sabotage their long-term survival, while those that evolve into less virulent forms have a better shot at longevity.

It’s now clear that helminths including those that cause much more morbidity and mortality than hookworm, have evolved not only to protect themselves, but to mitigate damage to their host and – in some instances – even fight other infections that threaten their host’s survival. There is growing evidence that over eons of co-evolution, we have altered each other’s genomes.[3]

Consider Schistosoma mansoni, one of three parasitic worms that move back and forth between freshwater snails and their definitive human hosts and cause schistosomiasis; the second most devastating parasitic disease after malaria. [4] Repeated infections can cause anemia, malnutrition and learning disabilities in children. Chronic infection can damage the liver, intestine, spleen, lungs and bladder and result in a particularly gruesome death.

S mansoni reaches maturity in its human host in the form of a blood fluke, which lays eggs deep inside the veins feeding the intestine. To get back to its snail host, S mansoni’s eggs must travel through our mesenteric veins, cross the intestinal wall and reach the end of the intestine, where it rides our feces back out into the environment and repeating its life cycle. This is a challenging journey, particularly given that the eggs have no cilia or other means of locomotion to propel them along the escape route.

To overcome this challenge, S mansoni eggs have evolved to elicit an immune response that not only aids their transit, but minimizes collateral damage to their host along the way. They do this by excreting antigens that cause the immune system to coat them in a layer of CD+4 cells. These are called “T-helper cells” because they cannot kill or clear infected cells or clear pathogens, but call in killer T cells, including macrophages, B lymphocytes (B cells) and CD8 T lymphocytes (CD8 cells) to fight infection. This layer of cells creates what’s called a “granuloma.” In tuberculosis, granulomas typically limit bacterial proliferation, but S mansoni uses them to evade detection by killer T cells so they can escape and reproduce.[5]

Still, less than half of the 300 eggs mature worms lay daily succeed in escaping. The remainder become lodged in the intestine or swept to the liver, spleen, lungs or brain, where the granulomas inhibit egg excretions from reaching surrounding tissue.  In the liver, this greatly reduces the risk of severe hepatosplenic schistosomiasis, which can cause one to drown in their own blood.

These adaptations have led to the “old friends hypothesis,” which essentially asserts that over the long course of  evolution, parasites tend to adapt by looking out for the well-being of their hosts.

Based largely on research in mice and human medical data, many medical researchers and doctors now subscribe to the “hygiene theory,” which suggest the incidence of autoimmune diseases may be increasing in Western countries due to the improved sanitary conditions and reduced exposure to infections in childhood. There is also growing support for the “biodiversity hypothesis,” which posits that removing microorganism from populations genetically adapted to live with them can lead to an imbalance in their immune systems.  [6]

To test this theory, doctors began deliberately infecting AID patients with helminths in the mid-2000s to see if their conditions would improve. Typically this involved having patients ingest enough helminths eggs to elicit the parasite’s immunomodulatory benefits without triggering a full-blown infection.

Results from those clinical trials, however, have been largely disappointing. [7]

A majority of Crohn patients infected with N. americanus reported improvement in their symptoms in a 2005 clinical trial, while celiac disease patients treated with the eggs from the same species a few years later showed none. [8]

In 2014, researchers reported that chronic infection of mice used to model Crohn’s disease with the helminth Trichuris muris not only restored the mucus and cell morphology within their small intestines, but helped increase colonization of the protective bacteria Cloistridiales at the expense of the inflammatory bacteria Bacteroidales. Two years later, the same researchers collected and tested stools from indigenous Malaysians known to suffer from high rates of infections and  found the ratio of the bacteria reversed sharply following treatment for the infection. [9]“

The study uniquely demonstrated that helminth  infection can cause anti-inflammatory changes to the microbiome that were similar in mice and humans, according to co-author Ken Cadwell, associate professor of microbiology at the New York University School of Medicine.

“The reason this is significant is that (a) it reveals that certain features of the microbiome can be targeted for therapy, and (b) mice can be used to study mechanisms and inform human studies,” Cadwell said in an email to GeneticsIllustrated.com.

While there is still much to learn from studying mice, Cadwell said he is looking forward to seeing the results from the New Zealand and other recently launced challenge studies.

“I don’t think we can design therapy for patients with autoimmune diseases if we don’t fully understand what the “normal” response to helminth therapy is,” Cadwell explained. “There are too many complications.”

One of the goals of the New Zealand trail is to develop a good manufacturing practice (GMP) grade worm that can be used safely for ongoing trials and ultimately lead to an approved therapeutic product.

“There is a significant unregulated industry for helminth therapy, involving people self-medicating for serious allergic and autoimmune conditions,” said Mali Camberis, head of laboratories at Malaghan Institute. “We see a future where hookworms, or a hookworm-derived product, are an established therapy for auto-inflammatory or immune-mediated diseases, to treat patients and improve their overall quality of life.”